New from the Link Microtek engineering team is a complex, one-metre-long microwave rotating joint assembly for an S-band ground-based radar. 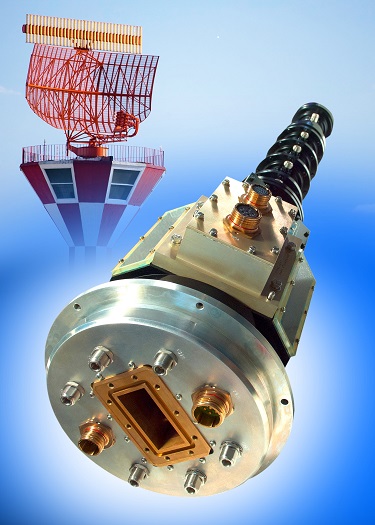 Allowing microwave signals to be fed to and from a radar antenna, such large rotating joint assemblies are an essential component of the S-band radar systems that are used around the world in air-traffic control, weather forecasting and shipborne applications. “Creating such a device from scratch posed a significant design challenge,” said Link Microtek’s managing director, Steve Cranstone, “not least because it is a large and hugely complicated microwave assembly, consisting of one high-power waveguide channel, six coaxial channels and an integrated slip ring. Design and development of such large multichannel rotating joints firmly puts us on the map as a supplier. It also complements our existing range of small rotaries for satellite communications. “With the renowned engineering expertise and specialist knowledge we have in-house, we were able to accomplish the mammoth task of producing the electrical and mechanical design. Using CST electromagnetic simulation software and SolidWorks CAD software, a complete 3D model was developed and from this we were then able to procure the assembly components and fabricate the hundreds of individual custom piece parts that make up the device.”

The rotating joint assembly incorporates one WR284 waveguide channel for 2.7-3.1GHz (S-band) transmissions up to a peak power of 200kW, four N-type coaxial channels for 2.7-3.1GHz transmissions up to a peak power of 1kW, two N-type coaxial channels for 1.0-1.1GHz (L-band) transmissions with a peak power 10kW, and a 35-way slip ring and brush block for feeding DC power to the antenna. As is usual for radar applications, the assembly had been specified for continuous rotation at up to 60rpm, so the finished unit was subjected to a prolonged run-in programme and comprehensive electrical testing on our in-house custom-built test rig. With decades of experience in this area, our engineering team has the necessary expertise to ensure that our S-band rotating joints provide years of reliable service, despite the complexity of the designs and the demanding nature of both their duty cycle and the environments in which they are deployed.

Enquire today to find out more about our products and the service we offer.